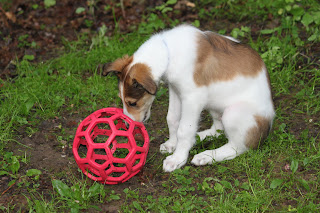 17 days ago, I brought home a Borzoi puppy. Java is now nearly 11 weeks old, has nearly doubled in size and weighs 23 pounds. He has settled in nicely and even though our dogs accepted him I am still cautious when exercising him. Melissa at 83# can easily knock him over especially if she should play in the same manner as she plays with Lab Lucy. 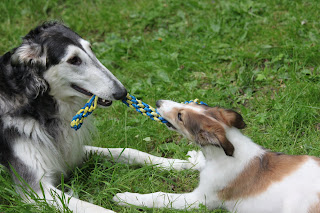 But I was pleasantly surprised that Melissa toned down her play style and gets on the ground to play with Java. She tugs ever so gently and goes for long walks thru the woods with Java, both dogs running off lead in the fenced area. The first few times I worried as she went speeding thru the paths, but she quickly put the brakes on when approaching Java. She has a sense of where her feet are at all times. This is not something I taught Melissa this is just part of her personality.

Lucy on the other hand is another story. She has no concept of where her feet are when she is outdoors. She is always on the move looking for something to do. It is not a bad thing, it is just part of Lucy's personality. She moves fast, is a solid mass of hard muscle at 50#s...she could do some damage if she ran into Java. 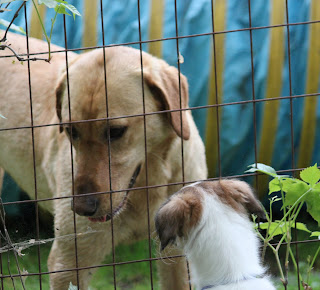 When outside, Lucy is in one fenced area and Java in another. Java enjoys chasing Lucy back and forth from side of the fence while Lucy retrieves her toy on the other. After Lucy has had enough exercise and begins to move more slowly, I walk Java on lead around the property, Lucy, off lead is more then willing to walk with us. She just side steps when Java goes to jump up on her. In the last week I have noticed he is jumping on Lucy less. Just a simple principle of learning. His jumping did not get Lucy engaged in a game with him. In fact she moved away. Jumping on Lucy was not reinforced, so that behavior of his has diminished.

Looking at my notes from when Melissa was a very young puppy, it took Lucy several weeks before she felt comfortable to be around Melissa during this phase. Whether it is the sharp puppy teeth that Lucy feels uncomfortable with, not sure how to reprimand appropriately, or just not wanting to play young puppy games I do not know. We are not pushing the issue. Lucy does not have to engage in playing with the puppy. We do give Lucy the opportunity to move out of reach and behind a baby gate while in the house....or I should say it is Java who is behind the baby gate while Lucy has the run of the house. She does not have to put up with silly puppy games until Java is older.

I had been worried about Katie our senior dog who moved in with us in March. Having lost both her owners due to their deaths, her home of 7 years, and her housemates which consisted of 3 Borzoi and a Cavalier, she just seemed a bit subdued. 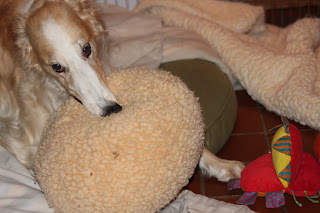 Katie has blossomed since Java arrived. She picks up toys and offers them to him. She gets the sillies with him. She is eating better and no longer seems to be searching the yard, the house, the barn, or my van for 'something'. 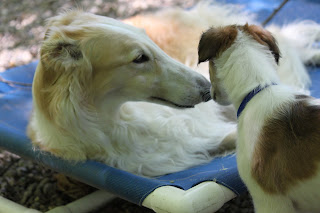 So what has Java been up to? As in my previous blogs which began the Fall of 2009 when I wrote about raising Melissa, we have been busy socializing. Java has been to a Freestyle seminar, an obedience/rally trial, he has been to class at Tails U Win, he has been to the lake. 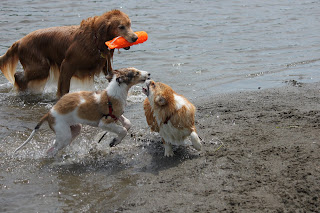 He has met several pups to play with, and several adults who enjoy having puppies around.


He is learning how to touch his nose to an object, to wait politely when doors and gates open and to respond to his name,. It is never too early to learn the name game, the foundation skill for a solid recall. 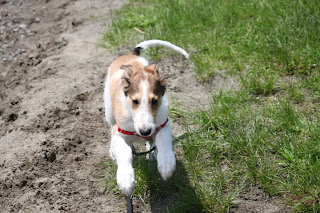 I am doing a few things different with Java then I did with Melissa and Lucy as pups. Follow along as I share some new ideas I have learned at various workshops and seminars I have attended since Melissa was a puppy. Just because I am a dog trainer, doesn't mean my learning ever ends. There are always new ideas, and new skills to try and new ways to get to the final goal. As long as I can use gentle and humane methods, I am ready and willing. 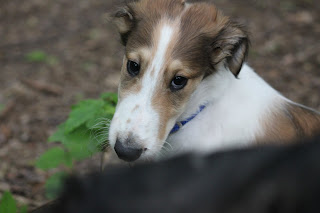 Take one look at Java, why would any one want to do anything that causes him harm in the disguise of training. Using the most up to date gentle methods based on scientific learning is the way Java and all my dogs will be trained.
Posted by Chris at 11:05 AM 3 comments:

Kong Aqua...new toy for the lake

We took the dogs swimming at the lake today, the first for the year. They got to try out their new toy....the Kong Aqua. I was rather skeptical when I was told directly from the company that this Kong would float. But float it did!!

The rope attached to it is long enough to be able to throw it far. The rope material is made of a soft nylon that was gentle on the dogs' mouths. 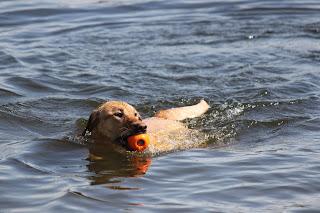 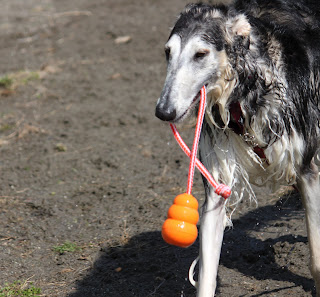 The shape of the Kong makes it easy to hold in many different ways, whether by the Kong itself or by the rope. 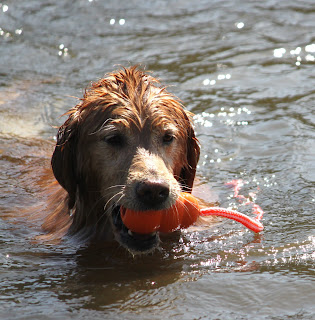 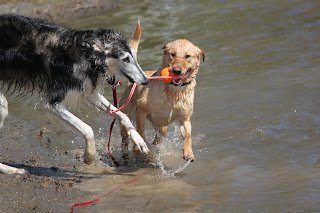 They ran with it. 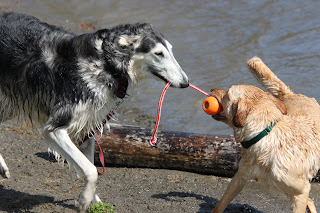 They tugged with it. 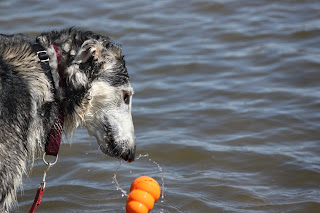 Melissa entertained herself by dropping it into the water
...and getting splashed. 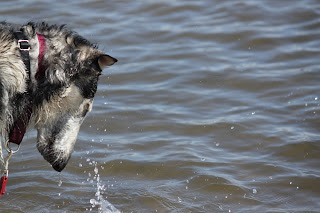 She then would retrieve it from the bottom of the lake and start all over again. 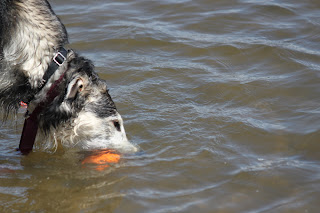 She and Glory took turns dunking it and watching it resurface. 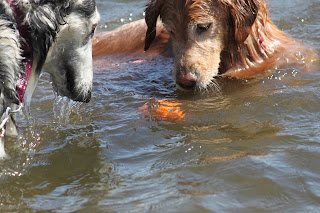 Glory had fun rolling on it. 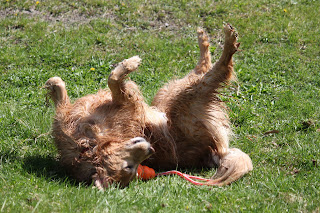 After a morning at the lake with 3 dogs playing with the Kong Aqua there were no marks on the rubber, no fraying of the rope. So far this new toy gets an A+
Posted by Chris at 7:11 PM No comments: