The treat goes flying across the room towards Lab Lucy. It quickly disappears into her mouth. She learned to catch easily, but not all dogs grab the concept of how to catch something. I am not sure if there is a genetic tendency to be a good 'catcher', but some dogs just seem to know how to coordinate catching better then other dogs.

The first time I tossed a treat in Melissa's direction it landed on the top of her head and rolled off. Her eyes remained fixed on me. She had no inclination to even move her head to attempt to catch it. So I proceeded to teach her how to 'catch'.

I like to start with a treat that is light in color and light weight. A treat that will just about float thru the air, almost in slow motion. Popcorn is my choice...light and airy, a trick I learned from a friend who is also a trainer. I chose white cheddar cheese popcorn, I wanted the taste to be very rewarding to Melissa. I wanted there to be some incentive for her to try and 'catch'. Before we had our first training session, I gave Melissa a piece to see if she liked the taste and consistency. Years ago I had tried plain popcorn with another one of our Borzoi. He took it gently from my hand and promptly lowered his head placed it on the ground. Plain popcorn was not appetizing enough for him. That is when I changed to the white cheddar popcorn, he enjoyed the cheese flavor and quickly learned how to 'catch'. The popcorn is used just until the dog understands the concept of 'catching', and are able to have the eye to mouth coordination. Corn really has no nutritional value for dogs....but a small amount during this training should be fine for most dogs. I then switch to string cheese, and other light colored treats until they can 'catch' like Lab Lucy at which time any treat or toy can be used.

The steps I used to teach Melissa to 'catch':
1) Melissa sat in front of me and I brought a piece of popcorn close to her mouth luring her muzzle slightly upwards. I then said 'get it' which is her cue to get food I toss on the ground for her or to take toys/treats from my hand. Since Melissa has learned not to grab food or toys from my hand unless invited to take them gently it was important that I communicate to her that she could open her mouth when my fingers were close to her mouth. She did indeed open her mouth in anticipation of the treat when I said 'get it'. I released it from my fingers as her mouth opened. She swallowed and looked for more. We repeated this step a few more times while gradually increasing the distance my fingers were from her mouth....we increased by inches. When she could easily open her mouth upon hearing 'get it' with my fingers about 8 to 10 inches from her mouth we moved to the next step.

2) Melissa was once again in a sit, but now I moved back a step and tossed the treat underhand. 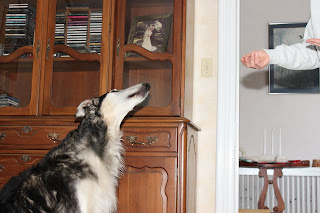 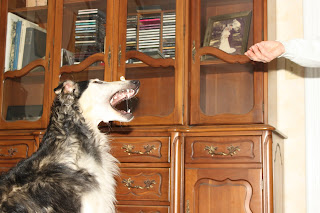 The first few times she missed, it rolled off her muzzle. She began to move her mouth towards the treat instead of just sitting still.
Notice the popcorn on Melissa's muzzle, she missed but she was getting the idea to open her mouth. We just needed to work on a bit of coordination.

3) We had two training sessions. The first one ended with Melissa moving towards the treat but still missing. That's was ok, we didn't need to get the final behavior perfect in one session. Melissa was trying and focusing on the popcorn moving in her direction. Her eye to mouth coordination seemed to be on the right track. During the first session after a few misses and the popcorn falling to the floor I did go back to the beginning steps of standing in front of Melissa with my fingers close to her mouth, her muzzle pointed upwards. I wanted my new game to be fun and rewarding for her, so like all training I broke the final behavior down into smaller increments to help her be successful.

4) Our second training session was just as successful. Melissa quickly got the concept of 'catching' and was rewarded by eating the cheddar popcorn. My friend Lessa, who took these photos, captured it perfectly...popcorn floating directing into Melissa's mouth. Thanks Lessa! 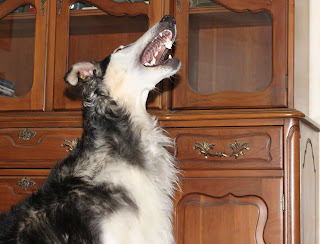 I gradually increased the distance and can now stand about 4 steps away and have Melissa catch the majority of the treats coming in her direction. My cue is my hand moving towards her then back to me three times on the 3rd and final time towards Melissa I say 'catch'. I may be able to fade out my hand movement but while she is still new to the skill of 'catching' I will help her out by priming her with my hand motion. I will begin changing Melissa's position from a sit to a stand and eventually a down. The first few times she is in a position other then a sit, I will move in closer for several repetitions to help her be successful; then will gradually increase the distance once again. We have graduated to string cheese, but on occasional she still enjoys cheese popcorn.
Posted by Chris at 9:32 AM 2 comments: