Kong Wobbler and the Pyramid

Two new interactive toys for our dogs! My thanks to Pam Green at Clean Run for suggesting them. http://www.cleanrun.com/index.cfm

The Kong Wobbler has a heavy base that makes it a bit challenging for some dogs to move onto its side to allow for dispensing of the food. But the opening is a tiny bit larger then the Pyramid so the dry food comes out easier. 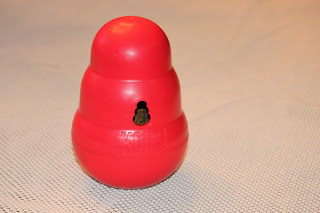 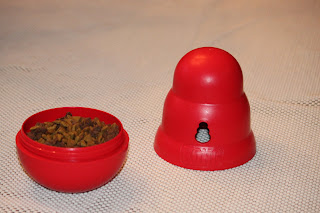 The Kong Wobbler can be twisted apart into two pieces for easy cleaning.


The Pyramid, developed by Nina Ottosson, looks similar to the Wobbler. It does not twist apart for cleaning, so it does take a longer time to air dry. I have not yet tried it in the dishwasher. It is slightly lighter weight then the Wobbler but the opening is smaller, making the dispensing of the contents a bit more challenging. 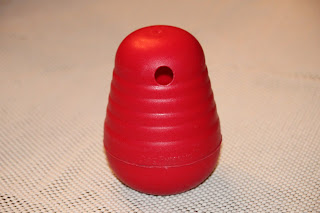 The dogs have used two new toys for about a month now, and both toys seem to be holding up to lots of rolling and bouncing. As with other toys, I rotate these with their other interactive toys.....keeping it novel and interesting for our dogs. The use of interactive toys can be mentally tiring. This past weekend, while we were away at a 3-day training seminar with Kay Laurence and spending evenings in a hotel room, Melissa was kept busy with the Kong Wobbler.
Posted by Chris at 8:30 PM 2 comments: 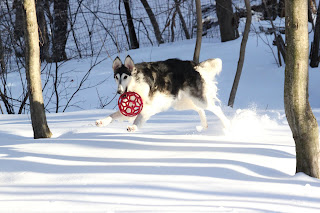 I believe dogs, just like people, get bored with the same old same old..... I remember as a young girl when a toy that I had completely forgotten about appeared out of the closet...it was new again to me and my brother. It became novel again and we played for hours with our 'new' toy'. And so, I rotate my dogs' toys. The old toys that have been put away for weeks or longer become 'new toys. Today with the freshly fallen snow, I took out two 'new' old toys. Lab Lucy and Borzoi Melissa have not seen the Holee Roller Ball in about a month. 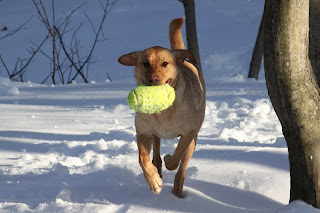 They have not seen their green football in over two months. Others toys were forgotten today as they played with their 'new' toys.

They got an extra long workout running in the snow. They played with a new intensity with their 'new' toys which only adds to my belief that rotating their toys keeps it more interesting for them. 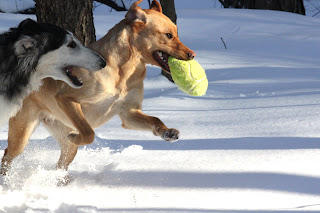 Lucy and Melissa had mock battles where they jumped on each other, they growled, they showed teeth. All of which is totally normal during play. They chased each other until tired. 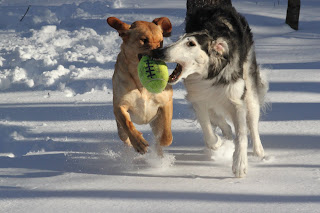 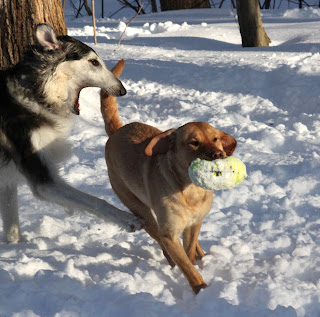 And when Melissa couldn't quite reach the toy she'd reach for Lucy's tail.