"Sit" Does your puppy really know what it means? 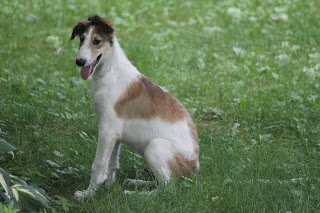 Somehow we all seem to teach our dogs to sit for their food bowls. Whether by luring: placing a morsel of food close to their nose and moving it a tiny bit so their nose goes up, their hind end goes down; or by capturing it: We see the dog moving into a sit and we mark the behavior and then reward with their dinner bowl. Every day, sometimes twice a day, our dogs are fed, we practice sitting, we add the word 'sit' and we assume they understand sit.

But do our dogs really know what sit means? What is their cue to sit? Positioning themselves in front of us? Seeing a food bowl in our hands? In the kitchen? Next to the counter? Dogs are very visual and may learn that sitting occurs only in these contexts. So do they really understand the verbal cue to 'sit'?

I have been focusing on teaching 15 wk old Java early on that correct responses to all cues should occur in all scenarios. I did help Java out by luring a few times. I also captured the action of sitting when he would randomly sit thru out the day. Click and treat each time he did and rather quickly he began to move into the sit position. I waited until Java was offering to sit for a click and treat before I added the verbal cue to 'sit'. The hand signal to sit comes built in if you lure the position. We practiced outside, we practiced inside in several different rooms. We practiced with the food bowl in my hand, and with my hands empty. We practiced with the lead on and the lead off. We even practiced at a farmers market this past weekend!

Every time I changed the place I was training at I lowered my expectations a bit. Sometimes I did lure him to help him out especially in a distracting situation . But I quickly moved away from the treat in my hand, to an empty hand, and then just the hand motion. When adding the verbal cue I would say the cue, pause, and follow it with the same movement of my hand that I had used to lure him into position. Sometimes I would see Java lowering himself into a sit, and I would add the word 'sit' as he was performing that action. Click and treat when he was in a sit. Using the clicker helped speed the learning process. Java has begun to offer behaviors in order to get a click which is then followed immediately with a treat.

Sitting at my side, instead of in front of me seemed to be challenging for Java. So I broke the behavior into tiny increments until he got the idea. When he knew the verbal cue to sit from in front, I moved slightly (think inches) to the right and asked him to sit, click and treat when he did. He was now sitting slightly crooked in front of me, think of it like a slice of pie...one slice over from center. Several reps were repeated at this angle until he was fluent in his movement to a sitting position when cued to do so. I then moved a bit more to the right each successive training session until he was sitting at my left side. I repeated this sequence for him sitting at my right side. Things moved more quickly once he understood that sit happened in places other then in front of me.

We practice each step of this on different surfaces: grass, carpeting, asphalt etc. We practice in different rooms of the house and different venues. For instance, at the farmers market I lowered my expectations. So much was going on, so many things to look at. I helped him out by asking for a few sits with him in front of me. That was a skill he knew fairly well in several different venues. Click and treat for each sit. I then turned my body ever so slightly and cued him to 'sit'. He did and got a jackpot, several treats in a row. Java was taking tiny steps towards learning how to respond to the cue to 'sit' no matter where he was in relation to my body.

Can Java sit with my sitting in a chair, sitting on the ground? The first few times I helped him by luring him into a sit. When he was beginning to offer to sit with me in this new position, without me luring him, I added the verbal 'sit' as he was moving into position to sit. I gradually moved the verbal cue to slightly before he began to sit. He now can sit on verbal cue with me sitting on the ground, in a lawn chair and to my left and right sides. 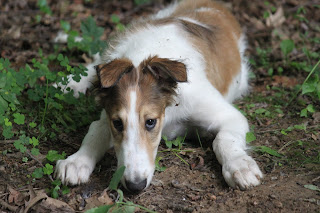 Does he know the verbal cue to 'sit' in all contexts? Not yet, but we are building a solid foundation to our final goal. I will also repeat all these tiny steps with the cue to 'down'. As Java learns to respond to various cues in different scenarios the learning will go faster. He will learn to generalize much more quickly. Until then, I will take each step slowly, always making sure he enjoys the training process.
Posted by Chris at 10:24 PM No comments: 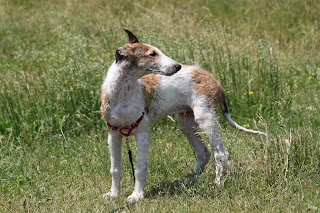 Java has been with us for almost a month, he is 12 weeks old. He has more then doubled in weight.


Who are appropriate playmates for puppy Java besides his best buddy Melissa? 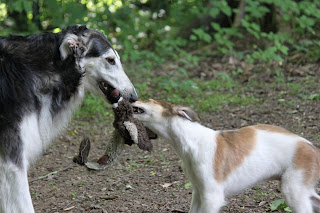 First, I keep everyone safe. A dog park is not a place to bring a puppy. We never know who the players are at the dog park, I prefer to choose Java's playmates during this critical stage of his mental and physical development. I never force the issue. If your older dog prefers to move away from your new puppy the first few days, let him. Give him a place to get away from those needle sharp teeth. Lab Lucy did not appreciate Java's jaws when he first arrived, in fact she didn't care for him following her all over. She kept moving away. Before things escalated, we made sure Lucy was never cornered and had a place to get away from Java. In the past week, Lucy has made overtures to play with Java. Her first gesture was to bring her toys over to him. Lucy is now playing very gently with Java. They mouth each other, they run together. So far they have not gotten on the ground to wrestle, but I can see that coming very soon.

The opposite can also be true. Don't let another puppy or adult corner your puppy. Different play styles, size and age are important to consider. An out of state friend of mine attended a play social this week with her 3 month old puppy. He was knocked over by a 6 month old puppy. My friend's puppy didn't want to play any more and moved away. But an 18 month old adult with good play skills quickly engaged him in play and he quickly forgot about the boisterous 6 month old who was put in another area to play. If left unattended I am sure my friend's dog could have been seriously affected by the episode, but an observant instructor quickly remedied the situation.

Just yesterday at water's edge I picked Java up into my arms. I saw a medium size dog off lead trotting down the beach towards us. It was an unknown dog, I didn't know his play style or if he he liked puppies. The owner put the dog on lead, we then let the dogs walk near each other for a few steps. 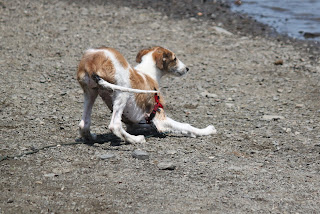 The adult dog did a slow and easy play bow....Java returned the gesture and within a few seconds both were running and playing off lead. I may be a bit cautious but I do not want my puppy to have a bad experience at this age. Even the nicest dog with a pushy play style could frighten your young puppy and set him up for a lifetime of disliking other dogs. For more on puppy play see my blog on when Melissa was this age: http://hemlockhollowdogtraining.blogspot.com/2009/11/puppy-playgroups.html

Other then our dogs at home, Java has met dogs of various sizes and shapes. He has played with some of his classmates at his weekly group training session. He has met not only other puppies but also adult dogs. A stable adult with appropriate communication skills can teach our puppies much about when they use their mouths too hard, or when a body slam is too rough. An appropriate adult will also invite a puppy to begin to play again after a reprimand. A puppy will also offer a play bow after he got to rough, as if to say 'sorry let's play again'. 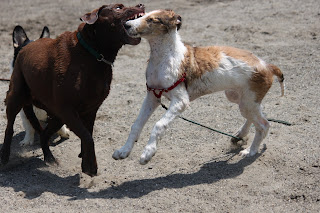 Java jumped roughly on this 7 year old dog while playing on the beach. She gently told him that was not acceptable, she did not want to engage in body slamming games. It may look serious, but she never touched Java. He got the message and was much more gentle with her afterward.


On the other hand some dogs like to play rough and tumble games. If evenly matched and each dog comes back for more wrestling then the play is appropriate. Java met Maddox, a newly adopted dog my friend Barbara recently acquired. 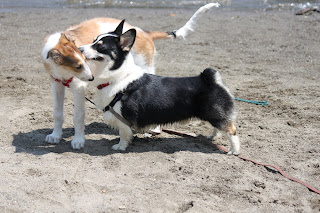 Maddox is confident and outgoing, it took a few minutes for Java to figure out his play style. We watched carefully in case we needed to intervene. 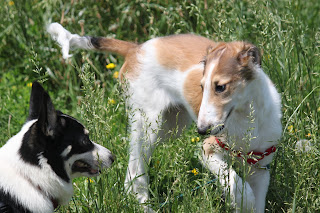 Java lifting his front paw and did a few play barks, an indication he was getting ready to play. Maddox did the same, playbows followed and they were off and running.

Here are a few photos of their play session. Evenly matched they took turns chasing and mouthing each other. Those teeth look serious, but it was all appropriate play. 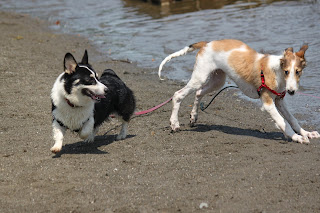 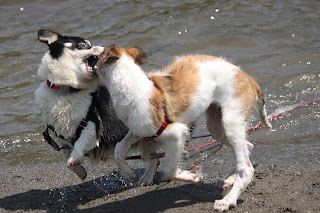 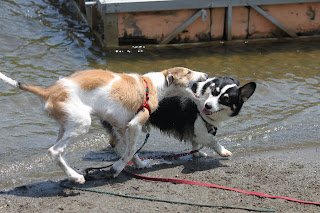 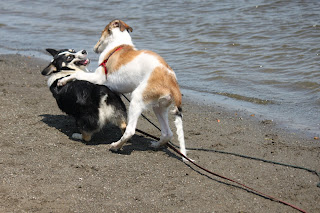 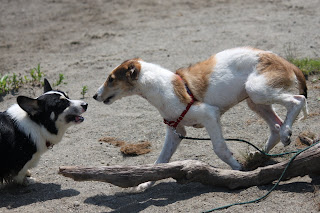 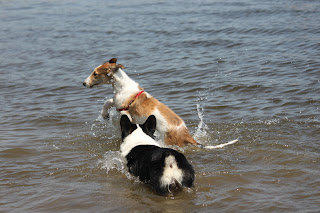 If you are unsure if certain dogs are appropriate for your puppy contact a certified professional trainer, one who believes in using only humane methods and who has studied canine body language. Beware the trainer who says 'let dogs work it out'. Your puppy during his critical early months could be frightened or injured. No dog or puppy should have to 'work it out'. Keep it safe, keep it fun.

Two of my favorites on the subject are 1) Play With Your Dog by Pat Miller CPDT-KA, CDBC and 2) Dog Play- Understanding Play Between Dogs and Between Dogs and People DVD by Patricia McConnell PhD.
Posted by Chris at 3:01 PM No comments: