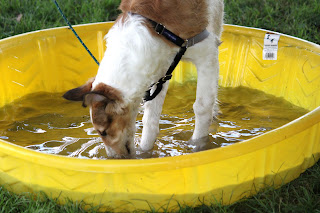 This morning a group of us helped at the annual 4H camp held on the grounds of Albany Obedience Club. The children rotate thru training sessions on agility and rally, and have different educational programs to learn more about dogs. I was there specifically to help teach the children on the needs of puppies, how we train them, how to approach them etc. It was also a wonderful opportunity to socialize our puppies with children. The puppies also had time to play with each other, another socialization opportunity. 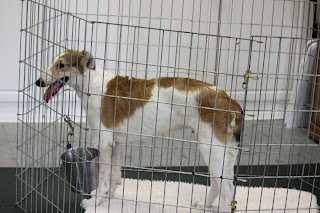 We set up crates or x-pens for the pups to rest in between training sessions. It was a good opportunity for each puppy to practicing being confined in a different environment. We all had toys and chews to keep our pups occupied.

There were all sizes and shapes of puppies. 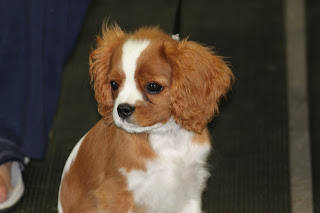 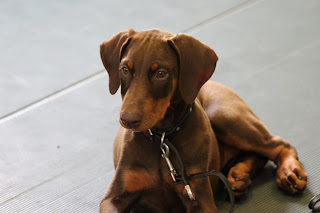 Each child had a puppy to work with . We practiced the name game...where the puppy learns how to respond to his name. Java thought it lots of fun, 'Java' and he got a treat, 'Java' and he got a treat. A wonderful venue for our pups to learn how to respond to someone else other then their owners. After many repetitions the pups were able to turn away from mild distraction and look immediately to their handlers when they heard their name. 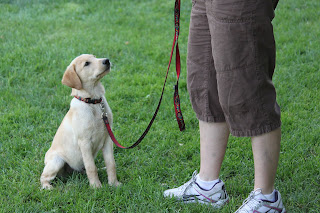 We also practiced how our pups should greet politely. Puppies want to be near our face, think of how many times we pick them up and hold them close to us. The rules change when they get too big and we no longer pick them up. So we need to teach them that keeping four feet on the ground, with the final goal of sitting, is how to get attention from us. 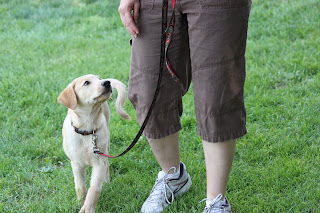 The pups had lots of breaks to walk outdoors to for potty breaks and to cool off in the wading pools. 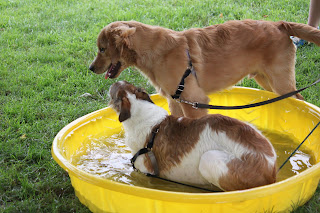 The children each took a puppy and practiced handling a dog different then there own. It made me smile to see these young handlers talking in soft voices, helping the puppies out with a cookie to move them thru the club grounds, and encouraging them to try the pools. Best of all was the laughing and giggling along with the puppies playing. Kids having fun with puppies, and puppies learning many new and different sights. A perfect day! 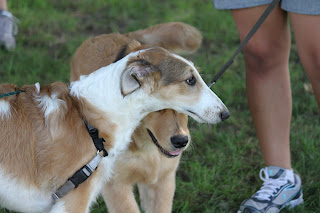 Java and Bryce, always seemed to find each other, they are becoming the best of friends.
Posted by Chris at 2:30 PM No comments:

Targeting is a skill where Java will learn to touch a part of his body to an object, known as the 'target'. Usually we teach dogs to touch their nose or paw to an object. Targeting is helpful in teaching our dogs to go to a mat, lying on it and remaining in place; for service dogs to open and close doors; to move our animals from one place to another; to teach them to go on or under obstacles; or to facilitate teaching tricks. It also helps dogs to learn about their bodies, for Java I wanted him to begin learning about turning his body to the left and right in a circle. This helps with strengthening his hind end and learning about hind end awareness.

I started to teach Java how to target a bit differently then I have in the past with my other dogs. Instead of teaching Java to first touch his nose to the center of my palm, I started with a target stick. 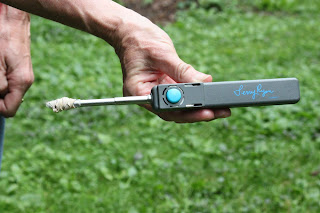 Target sticks can simply be a spatula, a spoon, a stick with taped wrapped around the edge for visibility. Or you could opt for a more formal click stick which has a clicker built in. http://www.things4yourdog.com/clik%20stick%20by%20karen%20pryor or a target stick that has a red rubber end and also comes with a stand for distance work. Both can telescope to over 20 inches. 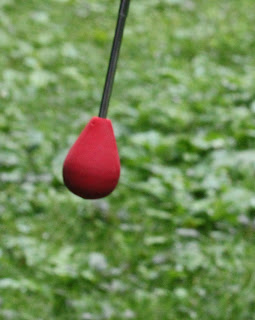 I wanted to give a target stick a try to see if it would facilitate his understanding of moving towards an object to touch his nose. I had already used my hands to do a lot of touching him all over his body, especially around his feet to accustom him to having his nails trimmed. Just for my own curiosity I wanted to see if teaching him with a target other then my hand would make a difference to the learning process.

I paced the target stick very close to his nose, he was interested in something different, he moved closer to take a sniff. The instant his nose touched the rubber ball, I clicked and gave him a treat. 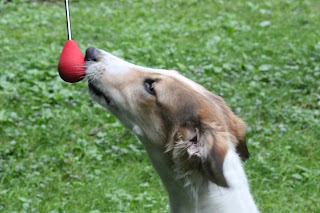 Gradually I moved the target stick inches further from Java, he had to make the effort to move towards the target. I continued to click and treat each correct response. 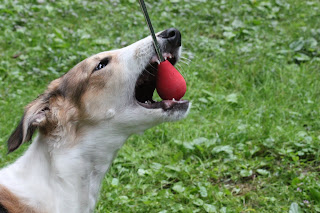 I was late on clicking a few times, and clicked as Java was attempting to mouth the ball, no need to yell at him. He was just learning what this new game was all about. This is the beauty of clicker training, the only 'correction' the dog receives is the lost opportunity of receiving a reinforcement...his treat. Our relationship was intact, he still trusted me. I just withheld a click when his mouth touched the ball. The next rep I clicked a tiny bit early, just as his nose was about to touch the target, but before he opened his mouth. He quickly understood that it was his nose that needed to touch the red ball on the target stick in order to get a reinforcement 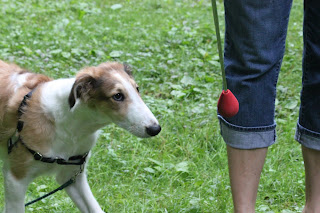 It wasn't long before Java was following the target stick. 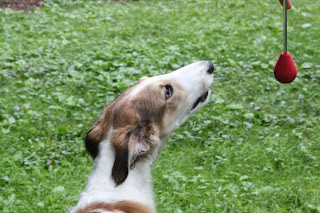 I began moving it ever so slightly to the right, to get him to turn in that direction.

We have had a huge amount of rain the past two months. Last night the rains came again, and we had downpours thru out the day. Weather radar shows more rain coming, so I took advantage of a break in the rain to let the dogs get some exercise running thru the fenced wooded acre behind our barn. The ground is saturated and in some place we have a bit of standing water.

Java was the first to notice the puddle. 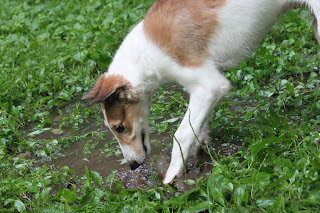 An invitation to play. 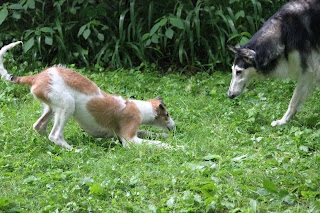 Lucy drops a toy in the water to entice Melissa and Java to play with her. 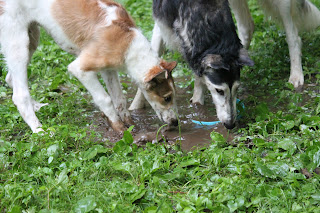 But Java finds the water more interesting, and the digging begins. 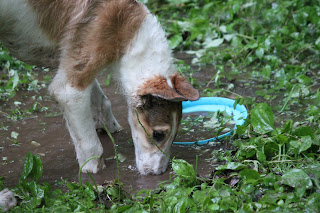 I am not sure if it was the texture of mud, the sound of the splashing water that gave Java the sillies or lack of exercise due to the rain earlier in the day. 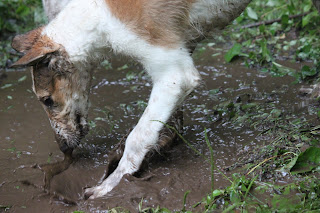 But the muddy water went flying. 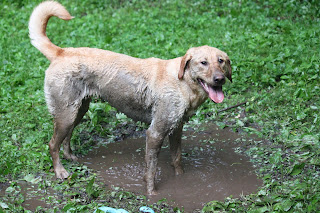 I could have stopped the dogs from playing in the mud, but they were having fun. It is an area of the yard that is theirs to play and run, it is not landscaped, grass will grow back. The water has already seeped into the ground and I filled the hole while the dogs were eating their dinner in another area of our yard. Cleaning their coats is a bit time consuming, but it is well worth it in exchange for having tired dogs as we get ready for another round of thunderstorms and rain. And I will let you in on a little secret.....a little bit of kid came out in me and I had fun watching them get the sillies. 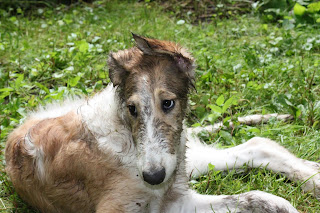 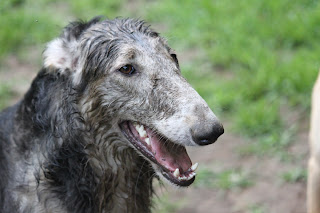