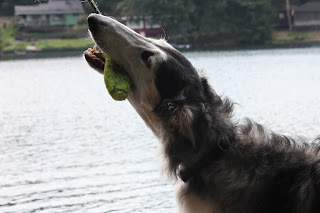 I really like to play tug with my dogs. It is a wonderful game to burn off energy. It is a way to play with our dogs indoors and out. But, as with all games, it comes with some rules. You may have heard that tug of war can make our dogs be out of control, show some aggressive behaviors and horrors, be dominant! Not so, if played by the rules, and honestly dogs are not trying to take over our world. If we did not have rules to follow when driving our cars we would have chaos on the road. We follow rules, we stop at red lights, go on green, stop at stop signs, drive on the correct side of the road. Our dogs learn to follow rules when the come to live with us, the learn to sit, wait, and be polite when greeting visitors etc. They must also follow the rules for tug of war. 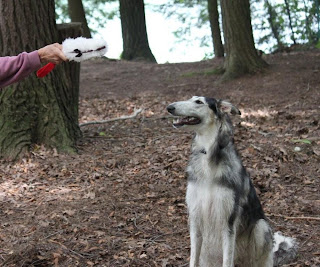 1) Melissa must wait for an invitation from me to engage with the toy. Never is she allowed to just grab the toy from my hand. This is a self control skill. In the beginning I allowed her to stand before releasing her to the toy, but once sit was on cue, she was asked to sit.

2) She is allowed to move forward to get the toy when she hears 'get it'. As I say this, I also begin moving the toy around. The movement makes it more exciting and Melissa leaps out of a sit to get it. 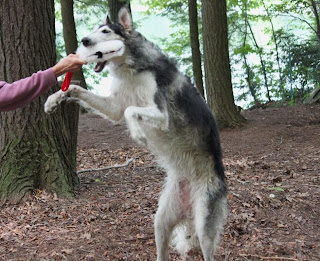 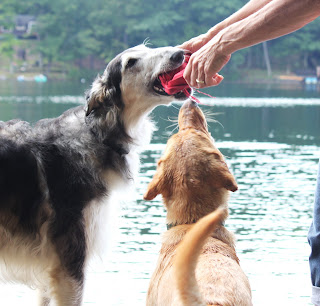 3) Since I have multiple dogs, I release them to play with their name first then 'get it'. One dog at a time gets to play tug with me. Here Lucy patiently waits patiently for her turn to play.

4) Any time teeth are felt on my skin, the game is over. I let go of the toy and walk away. Melissa has a soft mouth, but even the tiniest feel of teeth on my hand, was enough for me to release the toy and move away. Game over. It took Melissa two repetitions to learn that her teeth were not to touch my skin. Lab Lucy took more reps., she tugs harder and for a longer period of time. I used a lower value toy to begin with, and followed the protocol of stopping the game as just described. Once she understood the rule of no teeth on skin, I increased the value of the toy.

5) Ending the game of tug. Dogs must learn a 'give or drop it cue'. Tug takes two to play. If I stop tugging and hold the toy close to my body, it is not as much fun. I taught this to Melissa by ceasing to tug as I held the toy close to my body. At the same time I offered Melissa a tasty piece of food close to her nose as I said give. Melissa would release the toy and eat the food. I quickly engaged her in another game of tug. Soon Melissa was releasing the toy when she heard the cue to give. I am now beginning to use another game of tug as a reward...she gets to play tug again after she releases the toy. This is an example of how food can be faded out of the picture. Melissa does what I asked, to give the toy to me, and as a reward she gets to play again.

6) Sometimes I let Melissa 'win'. I let go of the toy as I say 'it's yours' and off she goes running with the toy in her mouth. Sometimes I 'win' and end the game and put the toy away. This keeps the game fun for both of us, we both get a chance to have possession at the end of the game. Melissa remains eager to play the game of tug whenever I engage her to do so. 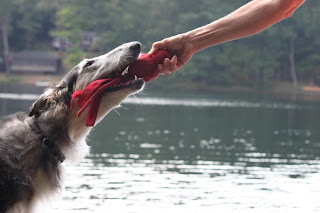