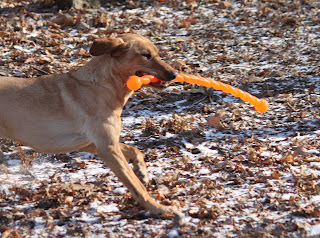 Remember when you were a kid, and you found a toy or game in the back of your closest that you had forgotten about? Remember how it once again seemed new and you would play for hours?


It's the same for our dogs. They can get bored playing with the same toys every day. I give my dogs access to about 3 or 4 toys at a time, and hide the remaining toys. Every week or so I take away the ones they have been playing with and take out some 'new' toys. They play with their 'new' toys as if they have never seen them. They are more interested and play for hours. 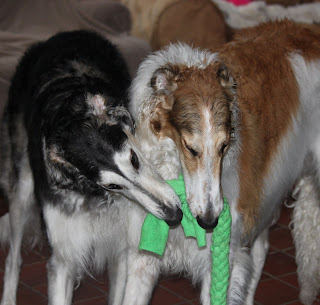 Aunt Joy made our dogs this braided toy over a year ago, many washings and many times introduced as 'new' has given it many hours of playtime.

Indoor toys also become outdoor toys after they become ragged after many washings. That brings on another concept of 'new' toy. This blue monkey was no longer of interest indoors, but when I brought it outdoors, Melissa and Java ran and tugged for hours as if they had never seen such a toy with long legs and arms. 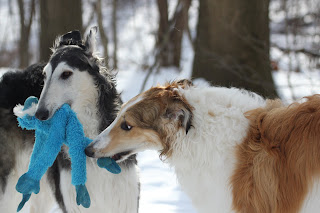 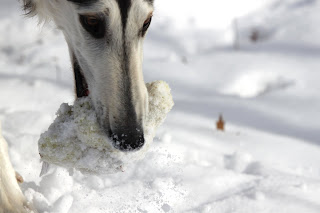 A forgotten toy found under the snow can also add hours of fun. 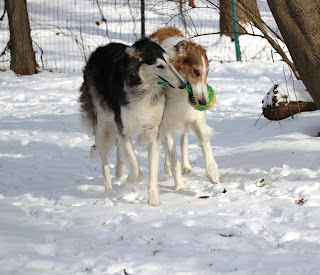 If your dog is given several toys as gifts on his birthday or Holiday, save a few for another day. Give him one now and save the rest for later. This green and orange ball on a rope was a Holiday gift, I gave it to the dogs the end of January.

Winter can be long enough here in the north east, let's keep our dogs' minds engaged by rotating their toys to make them 'new' once again. Same idea for their meals in interactive toys, think outside your usual Kong, try a Twist n Treat, Kong Wobbler, or Kibble Nibble Ball for a few days. 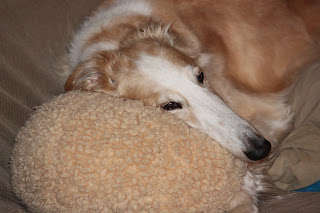 Best thing about a new toy, it challenges and tires them mentally. Some dogs will use their 'new' toys as a pillow.
Posted by Chris at 2:08 PM