Melissa made her debut as a pet therapy dog yesterday. About a month ago she passed the requirements to become a certified therapy dog. The paper work arrived and Melissa was ready to visit. 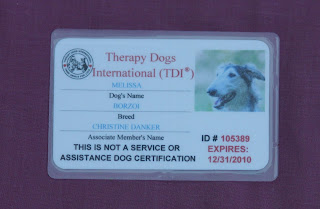 When I start a new dog doing therapy work, I take it slow. I watch the dog for any signs of stress, any avoidance, or shutting down. Even though we expose our dogs to LOTS in preparation for the certification test, real life situations can be different.

Here is what was new to Melissa:

1) She has walked on linoleum floors in the past....but never such a long stretch of them. She handled them fine.
2) She has been touched, hugged, kissed, by one, two and sometimes 3 people at a time. What I forgot about was the ID tags that many employees wear around their necks. As they bent to hug or kiss Melissa, their tags touched Melissa around her head. The first few times I praised Melissa and acted like it was the best thing since sliced bread. I wanted her to associated the tags with my verbal praise, to let her know it was ok. I have paired treats with verbal praise in the past...Melissa did fine.
3) Melissa had never seen IV tubing, or a patient with an IV in their arm. I made sure she did not touch, lick or get tangled. Again my verbal praise helped, and targeting of her nose to the palm of my hand helped guide her to the other side of the patient.
4) She has seen wheelchairs, but had never seen a stretcher. She looked and gently moved in that direction, towards the hand reaching out from under the blanket.
5) The beep beep of the blood pressure machine was new...she moved her ears forward and tilted her head. I think would have liked to investigate it further, but I cued her to sit and stay while the patient finished having vital signs taken. Melissa then watched the BP machine be wheeled to another room.
6) The smells of antibiotics, wounds, medications and blood products was also new to her. She didn't outwardly seem to notice, but I know a dog takes in everything. Melissa was very well aware of her new surroundings, it was registering in her brain.
7) She visited with staff, patients and visitors, she enjoys being petted.
8) She showed off her 'take a bow', and 'shake' with each paw.

And before she showed any signs of being tired we left the hospital. I did not want to overwhelm her senses too much. Our visit lasted less then one hour. In the future I will visit longer with Melissa. But for the first few times, I will leave the building while she is still perky and upbeat. The dog who slows and is sluggish after being in a new environment may not be tired, he may be stressed. He is shutting down. New and different can be stressful, to us and to our animals. Best to have her become accustomed to all the new sights and sounds a little bit at a time. I want Melissa to enjoy every moment of being a therapy dog. I am hoping that visiting hospitals and nursing homes will be a large part of her future.
Posted by Chris at 5:01 PM